I’ve always wanted to be interviewed by Rolling Stone, the New Yorker or, even, Foreign Affairs Quarterly.  (In this last, I’d hoped to outline my vision for a future Myanmar that would begin with changing its name to WeUsedtobeBurma.)  Instead, the home I live in is now featured in another, less well-known magazine—Vagabond Monthly:  The Journal for Those Off the Grid and On the Lam.  (This is not to be confused with Vagabondage Monthly, an unrelated periodical devoted to crossing state lines for immoral purposes.)

The Tiny White Box in Pittsburg, NH, is an exquisite example of the group marriage among necessity and invention, creativity and inspiration, even desperation and isolation.  Regardless, the Tiny White Box is the home of Keith Howard, a former teacher, principal, actor, writer, nonprofit leader and, as Howard so piquantly puts it, “homeless drunk.”  Our profile begins with the glamor that is the Tiny White Box and finishes with a series of what we like to call “evidence shots,” the pictures that will be distributed to the media if Howard is ever brought to justice for the thoughts in his head.  They are what the box looked like before it became The Box.

Howard’s favorite spot to sit and dream is in his study (above left), where he is able to survey the Tiny White Box from a position of comfort and power.

Howard’s favorite spot to eat is in his dining room (above center), where he is able to survey the Tiny White Box from a position of comfort and power.

Howard’s favorite spot to write is in his office (above right), where he is able to survey the Tiny White Box from a position of comfort and power. 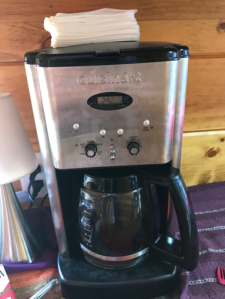 Ever self-effacing, Howard claims not to be a coffee connoisseur, but this Cuisinart coffee maker, with unused filters place jauntily atop, makes coffee that Howard says, “tastes fine.  I mean, coffee’s just a caffeine-delivery system.”  What a joker!  Howard brews a proprietary blend of Starbuck’s, Trader Joe’s, Folger’s, generic and store brand.  “Whatever’s around,” he modestly avers.  “It’s just coffee.”  Spoken like a true barista!

This is the box where Howard creates oatmeal employing technology called “microwaves,” which shakes up the food molecules until 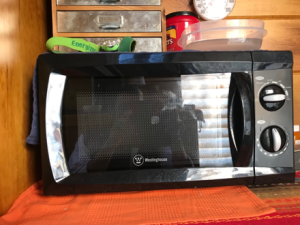 they get annoyed.  Howard claims not to have obsessive compulsive disorder, but how else explain his breakfasting every morning on McCann’s Instant Irish oatmeal with apples and cinnamon?  “I like oatmeal,” he responds, close-mouthedly.  Methinks he doth protest too much!

A firm proponent of water, whether for drinking, washing, adding to oatmeal or putting out

most fires, Howard stores his agua in what looks to be an iBottle, perhaps an early prototype of the next product from Cupertino?   Howard is, after all, a strong supporter of all products d’Apple.  “It’s a water jug with one of those decals Apple throws in with almost all their products.  Why in the world would Apple make a water bottle?”  That’s what we call a non-denial denial, folks.  Keep your eyes peeled for Apple to meet your hydration needs.

Here we have the art gallery at tinywhitebox.com, or, more accurately, the collection of beautiful images in the Tiny White Box.  Note the asymmetrical, almost slapdash arrangement of the pictures and the pride of place given to Howard’s degree:  Formerly Homeless Drunk, awarded by the College of Bad Breaks and Misunderstandings.  To our knowledge, Howard is the only recipient of a degree from this exclusive institution.

Here we see the TWB music room, consisting of a harmonica and a wireless speaker.  Given

Howard’s love of music, particularly in the folk idiom, the presence of a “blues harp,” as he calls it, is no surprise, nor is the sound reproduction quality of the Bose speaker.  With his years of diligence and practice, Howard has learned how to use the speaker.  The harmonica, however, will remain forever beyond his ken.

Sam (is a dog) relaxes on his very own bed.  During the day, Sam may lay claim to this space; at night, he and Howard share the space, a fact Howard doesn’t bother to deny.  “Why would I deny sleeping with Sam?  He’s my dog and we live in a small space.”  Far be it for VM to sit in judgment on what these two do behind closed doors.  Howard refused to reveal his long-term intentions with young Sam, uttering only, “What the hell are you talking about?”  We’ll leave it to our readers to read between the lines.

When entertaining, Howard uses this space as a combination sitting room and library.  Note

the books in the background.  Vagabond Monthly took the liberty of opening one and confirming its validity. Howard’s copy of Indian Stream Republic:  Settling a New England Frontier, 1785-1842 has real pages that appear to have been read. 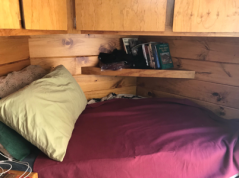 This is where Howard lays his head at the end of a long day.  Despite living in New Hampshire’s Great North Woods without other humans in the Tiny White Box. Howard denies being visited by the spirits of long-dead Native-American warriors, witches, goblins or demons of any kind.  Although Howard has a reputation for being friendly and humorous, this was yet another topic that appeared to surprise and upset him.

Howard’s home fitness area, where he lifts this weight a number of times each day.  Howard

also claims to walk between 4 and 10 miles per day, but there is no photographic evidence of this.  Howard offered in a defensive tone to show us his iPhone which he claims keeps track of how far he walks.  “For Chrissake,” he sputtered.  “I’ve averaged about 13,000 steps per day since I got here.  How could I show you pictures of that?  And why should I prove anything to you?” 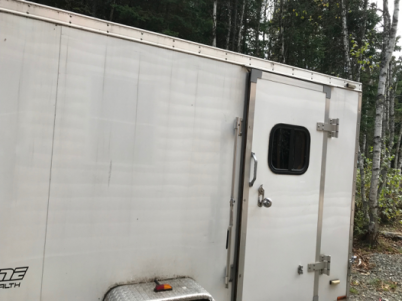 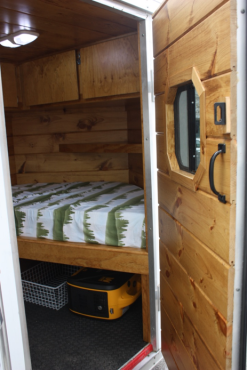 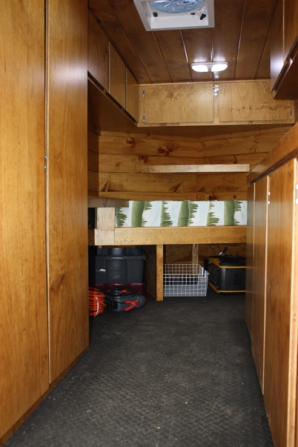